Digital Dementia and 7 Tips to Avoid It 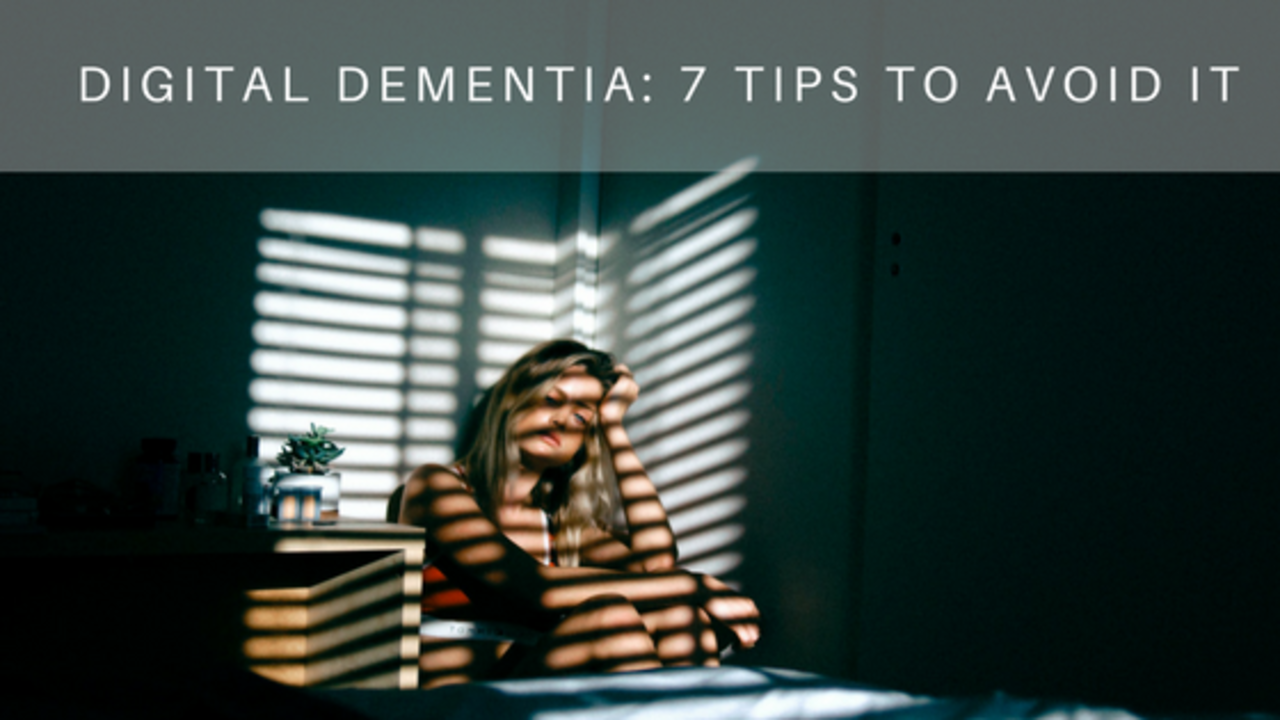 I first heard of digital dementia years ago when researching electromagnetic fields (EMFs) for my book A to Z of D-Toxing. It immediately resonated with me because I was becoming more aware of how my excessive screen time was affecting my brain functioning! To learn that digital dementia is more common in South Korea because its culture involves more digital exposures than others was a good story to promote so that we may learn from their experience.

Below is a really interesting, and important, report from my editorial team. Please let me know what you think!

Is digital dementia affecting you or your family?

The overuse of electronics at a young age is a rising concern for many doctors around the world. The demand for anything digital is at an all-time high and it's leading to a surge in what some people are calling "digital dementia."

In this article, we'll help you understand the facts about digital dementia (or electronic dementia as others call it), and share research on the effects of digital devices on children. We'll also provide seven useful tips to help avoid it.

What is digital dementia?

Digital dementia is characterized as the deterioration of brain function as a result of the overuse of digital technology, such as computers, smart phones and Internet use in general. This excess use of technology leads to unbalanced brain development, as heavy users are more likely to overdevelop their left brains, leaving their right brains underdeveloped.

With electronic technology in almost every household today, this new kind of electrical dementia is on the rise and hitting our youth at an alarming rate.

The term ‘digital dementia’ originated in South Korea a few years ago, a country that has one of the largest digital-using populations in the world. South Korean doctors noticed young patients experiencing cognitive and memory problems after heavy use of digital devices. They also found the symptoms to be more common with people who had sustained previous brain injuries.

With the advent of computers, young people are less reliant on their brains. Intelligent computers can now do most of the thinking for them, which is leaving many young brains almost redundant. There's also the worry that overuse of technology is causing short attention spans.

Dr. Manfred Spitzer, a neuroscientist and psychiatrist, wrote a book in 2012 named “Digital Dementia: What We And Our Children Are Doing To Our Minds.” He is a vocal advocate against training kids with computers and electronic media. In his book, he states:

“When you use the computer, you outsource your mental activity”

“The more you train kids with computer games, the more attention deficit you get.”

His research shows that between 15 and 18 should be the minimum age for media consumption.

“The more time you spend with screen media, the less your social skills will be.”

“it makes sense at the extreme that it would affect memory. We do know it can affect sleep quality.”

More on This Topic: Are You Experiencing Digital Dementia?

How to Avoid Digital Dementia For Your Teenager/Kids

There are precautions you can take to limit your child's chances of developing electronic dementia. Below are seven useful tips.

The suggested screen time for children of all ages should be limited to two hours a day and no TV or digital entertainment should be permitted for children under the age of two. Homes should have “screen-free zones”, especially in bedrooms.

2. Use your Head Instead of Relying on Digital Devices

When possible, try to think for yourself instead of relying on your computer to do the thinking for you.

Using the brain to learn something new, like a new language, provides brain stimulation that can fend off all types of dementia.

Exercise is extremely important in order to keep the brain active and healthy.

Brain-based learning refers to teaching methods, lesson designs, and school programs that are based on the latest scientific research about how the brain learns, including cognitive development—how students learn differently as they age, grow, and mature socially, emotionally, and cognitively.

Yes, reading is great stimulation for the brain, but reading from electronic devices such as a Kindle, exposes your body to electromagnetic fields which can promote electronic dementia.

Learn More: What Are EMFS?

Children need to spend the majority of their time interacting with real people and real life instead of the equivalent from computer games. Make sure they regularly perform the following:

Other Tips For Parents

You can also follow these tips for extra precautions against electronic dementia.

In this article, we learned the definition of digital dementia, the symptoms children could face and seven tips to avoid it. We hope you find this information useful and take electronic dementia as seriously as we do.

The use of electrical devices will only increase. As parents, it's our duty to care for our children and protect them from new dangers such as digital dementia.

To learn more about how technology impacts our wellness check out this additional information: