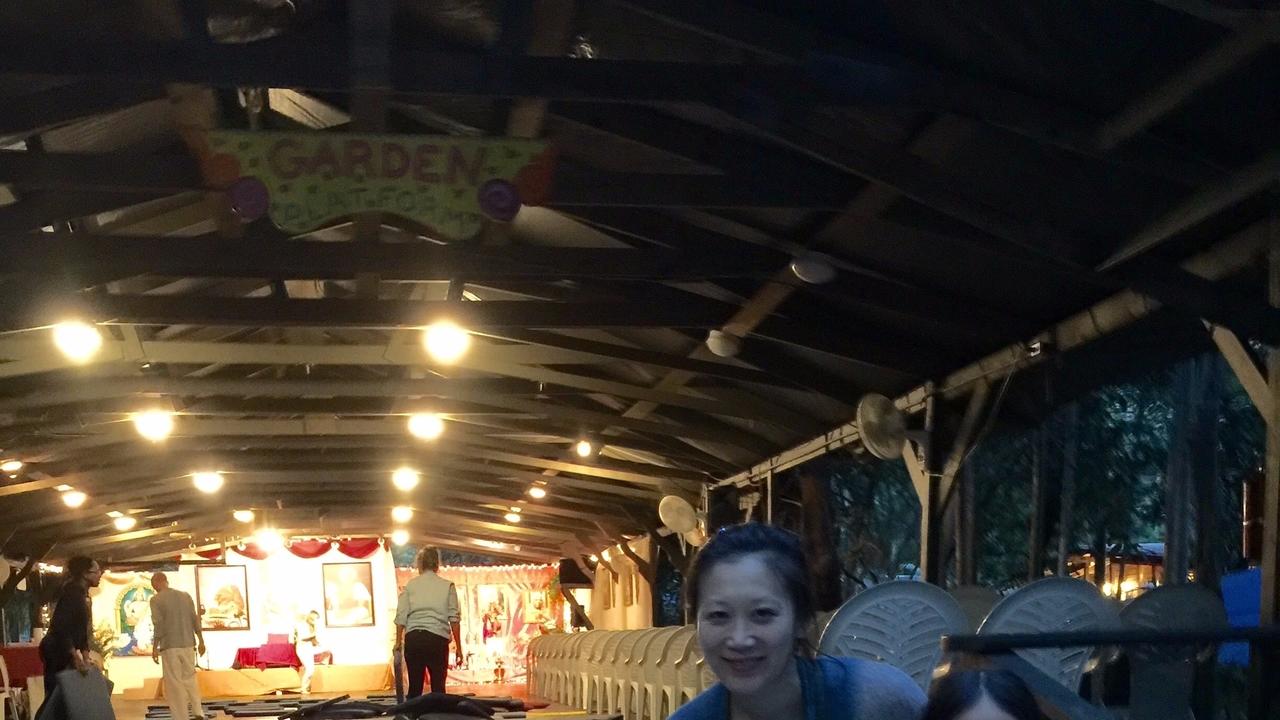 The first time I experienced chanting was circa 2002. In fact, it was in the location in the photograph above, which was taken in 2016. Sivananda Ashram Yoga Retreat in the Bahamas.

Business school classmates and I attended a yoga retreat in the Bahamas for five days. We were all pretty new to yoga, and we didn't know much about what we enrolled in. The key points that sold us on the yoga retreat were that it was relatively inexpensive (and included vegan meals) and it was beachfront in the Caribbean!

I encountered chanting for the first time at this yoga retreat. And it spooked me. The unknown scared me. Why were we chanting? What language were we chanting in? What were the meanings behind the chants? Was I casting dark spells?

So I avoided the chanting. When I couldn't avoid it, I sat respectively in silence.

What Turned Me Onto Chanting

Years later, I found myself very interested in a "yoga 101" experience, especially before my husband and I were going to "start" our family. So I enrolled in a yoga teacher training program for that yoga 101 overview because I knew yoga included much more than the physical, or asana, practice.

It was during my yoga teacher training at Laughing Lotus in NYC that I learned fascinating things about chanting in required reading: Healing Mantras: Using Sound Affirmations for Personal Power, Creativity, and Healing by Thomas Ashley-Farrand.

The key things that intrigued me:

Chanting is repeating sounds, words, songs, or prayers. There are many forms of chanting.

Mantra can generally be a set of words that are repeated frequently. In the yoga/Hindi/Buddhist traditions, mantra refers to Sanskrit words that are designed to be tools to aid concentration and to settle, or still, the mind for meditation.

"Om," or "A-U-M," is a well-known, simple mantra that is also considered the most sacred sound or vibration. It is considered to be the sound of the universe.

There are many possible intentions and results from chanting Om. One intention is to unify one person, or more, into the same moment, into the present. Another is to connect with greater universal energies. But there are many more possibilities.

Mantras also have countless intentions and potential benefits. One intention is to chant mantras to catalyze change in your reactions, habits, and addictions.

For effects, mantras should be practiced regularly for months.

Sanskrit is an ancient Indian language. Its sounds are believed to offer powerful benefits.

Sanskrit has been described to be unique among languages for its mathematical patterns, for its similarity to nature's repeating patterns, for its ability to move or evoke physical and emotional energy through its stimulation of the nervous system.

Sanskrit mantras profoundly affect you. They act like the ocean waves on your body and mind. When you chant or even listen to them your energy calms just by clicking into their reverent luminous rhythms. (4)

Present day has never been more noisy with sounds (like cell phones dinging from an email, text, or phone call), news, opinions, anger, disappointment, fear, and hurt. Advancements in technology are integral to our intense and chronic exposures to it. We are all overwhelmed by our new pace of life.
As I attempt to manage my technology addiction, I have found chanting to be a satisfying distraction from this itch to check my cell phone. I'm in day 6 of trying a 40 day chanting challenge. So far, I have found it immensely helpful in satiating me into doing nothing. When I run errands, I chant. As I wait for the kids during one of their activities, I chant. During my shower, I chant. On the subway, I chant silent. I've noticed that it's made me much happier to do nothing—which is rare when there's a cell phone that I can check—to just be present and available to the moment.
I look forward to the day when I regularly sit for chanting to settle my mind for a minute or two of peace and silence.

P.S. Over a decade after my first trip to the yoga retreat, I was thrilled to return to the same yoga retreat with my three daughters in 2016. The photo above is from that trip. Sadly, my husband had to work.

(2) Axel, Gabriel. "Your Brain on Om: The Science of Mantra: There is a vast science of sound in yoga used for increasing awareness and expanding emotional states." Oct. 2, 2013. Published US News & World Report: https://health.usnews.com/health-news/blogs/eat-run/2013/10/02/your-brain-on-om-the-science-of-mantra

(3) Thorp, Tris. "What Is a Mantra?" No date. Published on The Chopra Center: https://chopra.com/articles/what-is-a-mantra